Are Flexitarians the Next Generation of Foodies? - Signal Theory 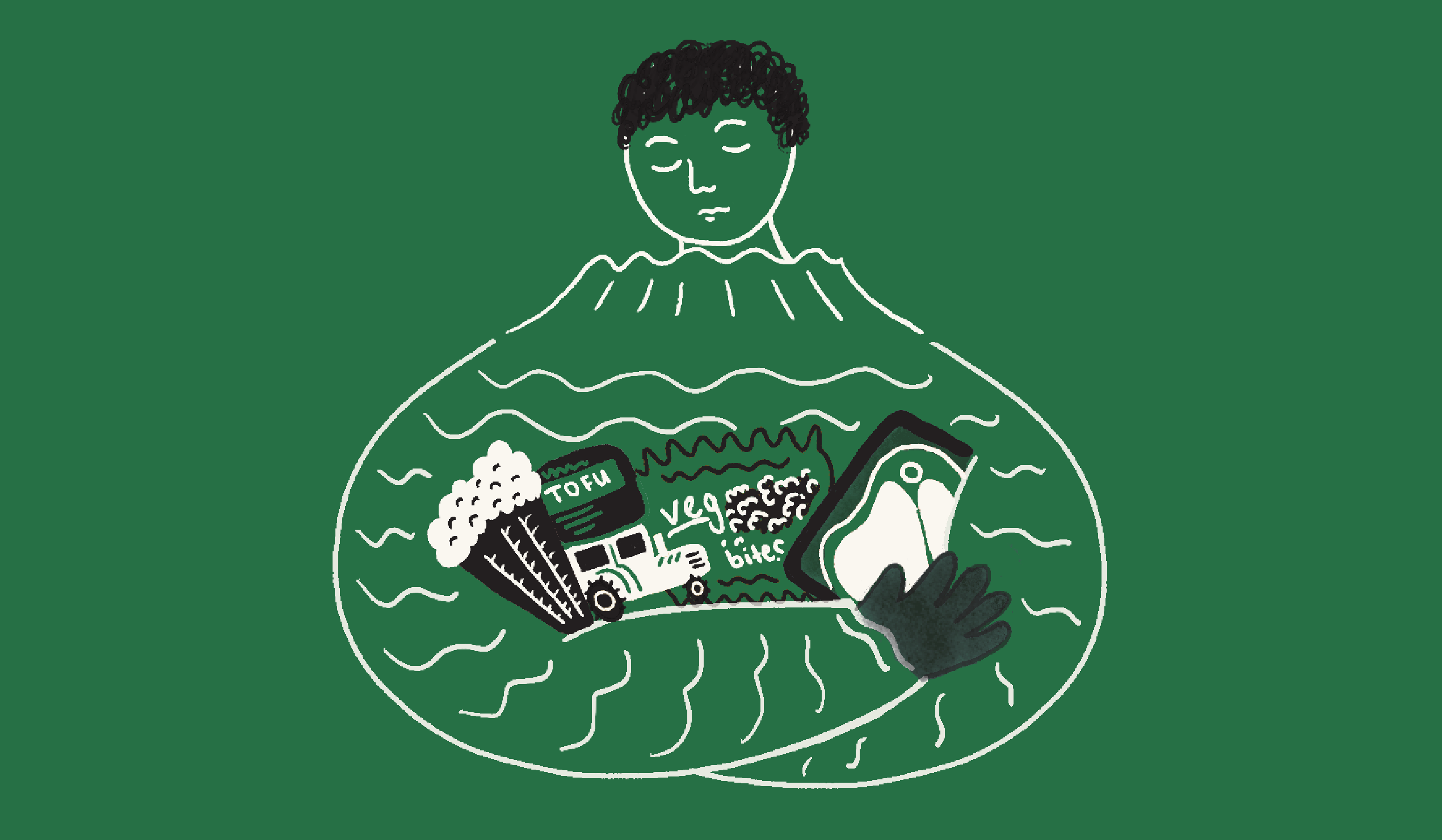 Are Flexitarians the Next Generation of Foodies?

Food habits and trends are evolving just as quickly as fashion, exercise and other social movements. In today’s culture, consumers place value in keeping up with these trends, especially if they have a positive impact on their own health or the health of the planet. However, people don’t want to compromise flexibility or choice when it comes to what they eat. Enter: flexitarianism.

What is flexitarianism? How does it compare with veganism and vegetarianism?

Vegans refrain from consuming all foods derived from animals, including meat, seafood, dairy, eggs and honey.

Vegetarians avoid animal proteins such as meat, poultry and seafood, and animal-based products including, but not limited to, stocks, broths and powders. They may consume some animal and dairy products such as milk, eggs, cheese and honey. 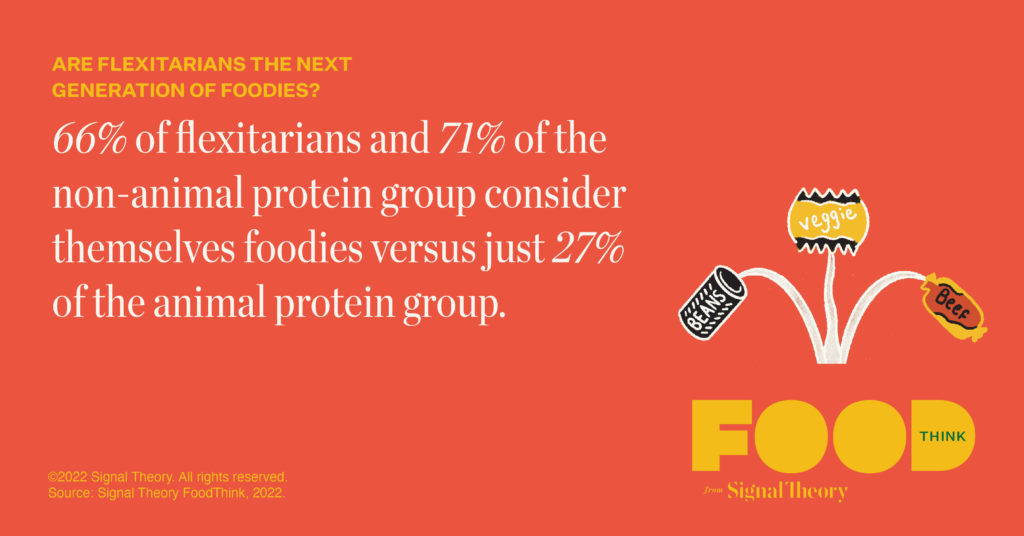 What influences these groups?

Observing the dietary habits of each of the three groups revealed that flexitarians tend to be closely aligned with the beliefs and behaviors of non-animal protein eaters. However, generational shifts, societal norms, time constraints and globalized taste in cuisines also significantly influence how individuals cook. Many flexitarians even strongly agree that they cook differently than their parents, with 22% agreeing they can cook as well as or better than their parents. Age, motivation to cook and current trends are additional determinants of the products and communication tactics that will resonate most with the flexitarian audience.

What are flexitarian behavior trends? 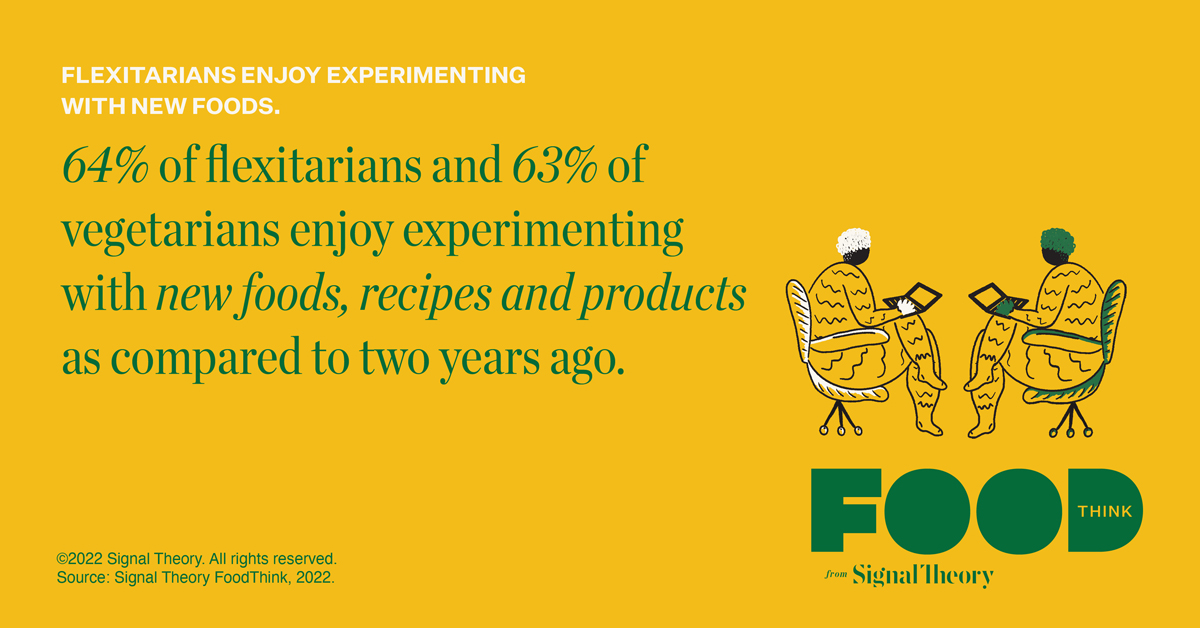 In alignment with flexitarians’ desire to experiment, 64% of flexitarians and 63% of vegetarians enjoy trying new foods, recipes and products more than they did two years ago, while the animal protein group has remained about the same. In the past couple of years, there has been a dramatic increase in product offerings for flexitarian, vegan and vegetarian diets – with everything from plant-based burger patties to cauliflower steaks. These options may have enabled the 70% of flexitarians and 74% of vegans/vegetarians who are eating healthier than they were two years ago. 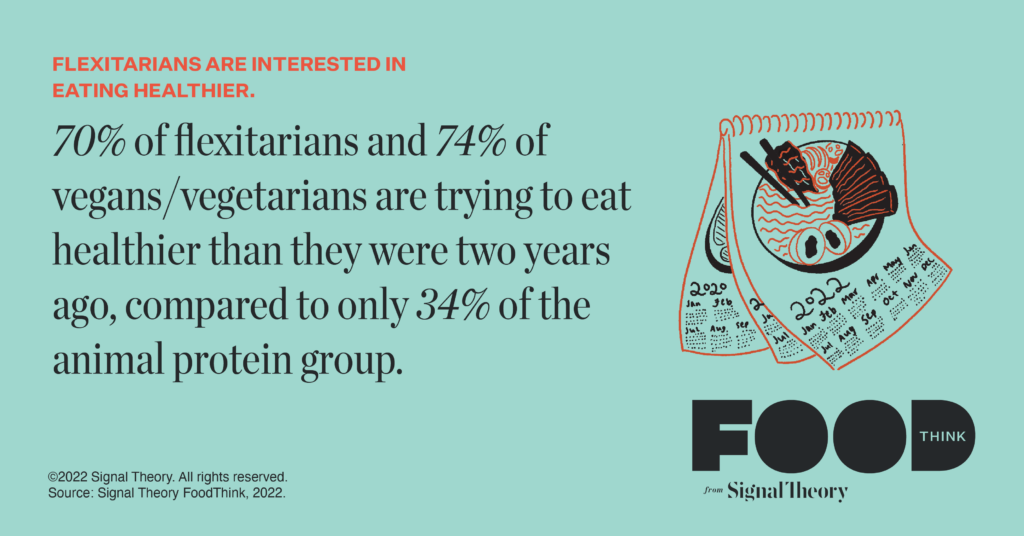 For most flexitarians, convenience is key. Sixty-four percent of flexitarians are using more convenient food options than they were two years ago, and premade meals, meal kits and other grab-n-go options are on the rise. Flexitarians and vegetarians are also more likely than animal protein eaters to order from restaurant apps and online retailers offering grocery delivery.

What does this mean for brands?

Flexitarians and non-animal protein consumers are foodies at the forefront of trends and new diet options. In fact, 66% of flexitarians and 71% of the non-animal protein group consider themselves foodies versus just 27% of the animal protein group. Overall, consumers in these respondent groups value brands that account for consumer interests and show they care through transparency, innovation and eco-friendliness. Ultimately, new products and new ways of enjoying their favorite foods will keep these groups engaged and brand loyal.

Want to flex with the flexitarians? Here’s how: 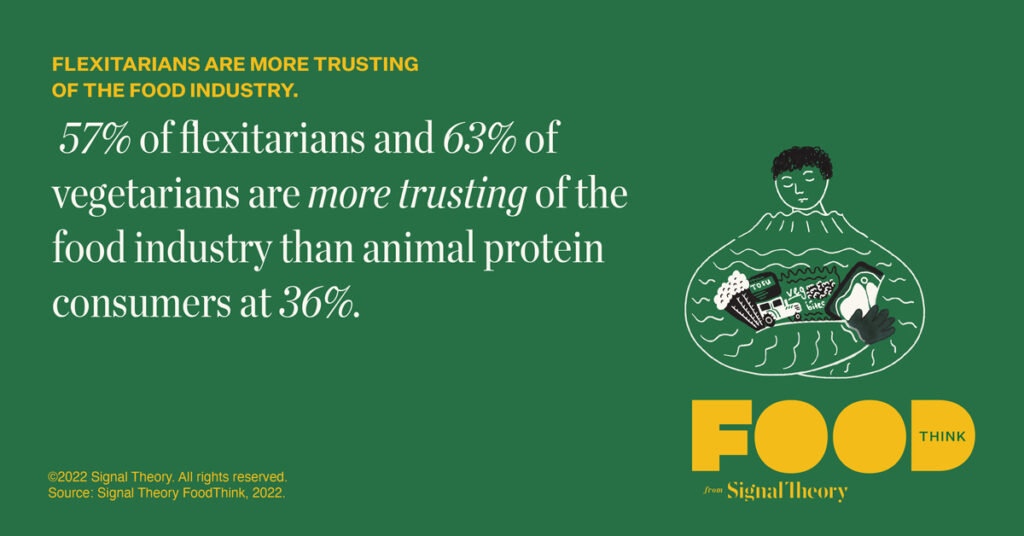 Want to learn more? FoodThink from Signal Theory is in constant pursuit of uncovering insights about America’s relationship with food. Check out the rest of our FoodThink articles and white papers. Or contact Signal Theory to chat about all things food and food production. We look forward to hearing from you!

Is Trust in Food The Savior of Working Consumers’ Relationship with Food?

Evolving Trust in the Food Industry

In our fast-paced world, it may be easy to forget that the food you eat comes from somewhere and someone else.